The largest members of the deer family, moose are some incredibly large creatures with antlers that reach six feet in length and 40 lbs. in weight. The size of a moose’s antlers is a show of their status and strength, especially during mating season.

Bull moose lose their antlers every winter, growing a new pair the next spring. These fresh antlers are covered in velvet while they grow, but this covering is worn away as moose begin the shedding process again – usually right around the start of the fall mating season.

This leaves antler paddles shiny and new – in perfect condition for displaying and fighting.

A display of a bull moose’s stature during the fall mating season, antlers do not come into play as often as most individuals think. Usually, younger and weaker males are easily scared off by a rival with a bigger rack of antlers. In fairly rare situations two bull moose with similar size racks will face off against each other, locking their antlers together to fight for a female.

Damaged antlers take many seasons to recover, growing back little by little each year.

As a bull moose ages, his antlers will grow in size, becoming larger and fuller until he reaches his prime – usually around age five. As a yearling, the moose’s antlers only have two or three points and small palms, with the number of points and the size of the palms growing each season.

The antlers of a bull moose in the prime of his life forms a protective arch over his face, preventing damage to his eyes when competing for mates.

As a bull moose continues to age, antler development begins to reverse, with the number of points decreasing and the paddle size regressing each season. Misshapen antlers are often found in moose over the age of 12, signaling their age and lowered reproductive status to females and potential opponents.

North American big game records are maintained by the Boone and Crockett Club, a conservation group that was started in 1887. Competitions for outstanding trophies are held every three years and moose antlers are scored on a 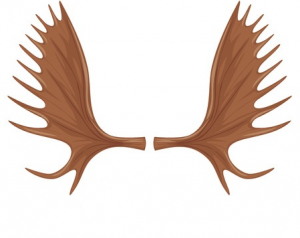 variety of features including:

Learn more about what these terms mean here and start the process for scoring your bull moose here.

For hunters interested in hunting for a bull moose in Saskatchewan, Lawrence Bay Lodge has large hunting areas, experienced guides and an incredible success rate of approximately 90 percent. Learn more about our moose hunting online and contact us by phone at 701-262-4560 to plan your trip!